On 5 April 2017, Pepsi released its newest advertisement for what we assume was the new font used on its fizzed drink. From a viewer’s perspective, this was the most confusing advertisement produced by Pepsi corporation.

So, what made this advertisement so controversial? Regardless of Pepsi including the reality star Kendall Jenner in its production, the corporation decided that incorporating individuals from all walks of life such as minority groups (coloured, homosexuals) and religious groups would be a great way “…to project a global message of unity, peace and understanding,” Pepsi had said in a statement for the Sydney Morning Herald.

However, audiences across the globe took to social media platforms such as Twitter and Instagram to spark conversation about the brand’s wrongful use of groups and individuals:

From A Professional’s Perspective:

If we talk unethical marketing and advertising practices, Pepsi might have had one idea about the overall meaning of their advertisement. In the media industry, it’s important to hold the knowledge of how to effectively express messages across all platforms. As a journalist, it’s important to understand the importance of effectively reporting controversial topics. Some of these topics include; gender, religion, race and sexuality. Today, news travels at a much faster rate and the public become immediately engaged with the news happening around them. Whether it be television, print or social media platforms, professionals must understand the best practices of voicing certain themes and messages to a now much larger audience. Reporting controversial topics in the media to have the ability to be shape-shifted by the public eye so the importance of highlighting the main messages trying to be conveyed is a crucial element. As we saw in the branding nightmare from Pepsi and the backlash it received post-broadcast, it is evident that controversial topics in the media never go un-noticed by an engaged audience.

In the professional industries of marketing and advertising, it’s significantly important to underline the overall message of the advertisement when grouped with visual elements such as image and video. Much like newspaper articles, it’s just as important for the intended messages of the content to be comprehensive to consumers viewing a photo or video.

Within the marketing and advertising industry, there are an array of ethical issues that have raised concern. Over time, the marketing industry has had to adapt to the rapid change of technology. In the past, marketers were not as aware of the ethical damage’s professionals face today. For example, in the 1940s and 50s promoting tobacco across health-related advertisements and today can be evident in Red Bull’s slogan ‘Red Bull gives you wings’. This form of marketing is referred to as puffery.

“Visual representations in marketing and communications can also be considered socio-political artefacts; they create meaning within a circuit of culture that extends beyond what may be intended…” (Bogerson & Schroeder, 2002)

Bad faith in the marketing industry refers to the subjective use of individuals in the form of a messaging trying to be conveyed by the professional. This distinctive representation can be conveyed across many areas such as race, sex, religion etc. If a brand is to include subjects into their overall message of the advertisement campaign, it’s important to act appropriately to social norms and topics of discussion. In the modern age, digital marketing and content creation now make up over 90% of the industry. So it has become almost impossible for marketing professionals as well as journalists to receive some form of backlash when introducing controversy into their content.

As we saw with the Twitter examples, the Kendall Jenner & Pepsi advertisement sparked conversation about the brand’s inclusion of minority group and racial themes. According to the Sydney Morning Herald Pepsi scripted other events such as the previous riots in July 2016. Here, (pictured below) a young woman of colour had confronted officers showing “defiance and resistance”. In Pepsi’s ad, Kendall Jenner played this role as a white female imitating the same form of ‘peace-making’ message. 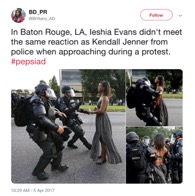 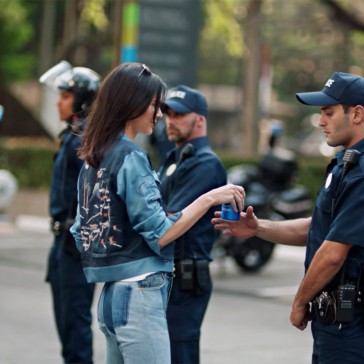 “Bad faith, especially in global marketing, must be avoided if a business wants to create a ‘genuine enterprise’…” (Bogerson & Schroeder, 2002)

The Law Behind It All:

Well like any form of advertising to a public audience, there are legislations put into place that brands must abide by. The Australian Association of National Advertisers (AANA) provides two sections of the codes of conduct in which marketers must follow to avoid any issues that may arise from its advertisements. The main practice not ‘Consumer Complaints’ describes the various aspects of marketing that need to be identified and portrayed in good practice. In regards to Pepsi being an American organisation, the AANA works in accordance with a global construct, meaning that the laws are similar across all forms of media in the two countries.

It is evident there was a lack of understanding about the legislation behind portraying controversial topics. As stated by the AANA Section 2.1 (Portrayal of People) outlines the guidelines of the “types of behaviour and restricts depictions of those types of behaviour against people”. Underlining discrimination of race, ethnicity, nationality, gender, age & sexual preference. Marketing and advertising professionals in Australia must be able to identify these topics in their content and must justify their use to audiences.

As the digital age grows rapidly, marketing and advertising professionals are expected to adapt to the changing of social norms and understanding the best ways to approach certain issues. As we saw in the advertisement, Pepsi at first thought addressing certain issues would be somewhat supportive of change and ideologies. However, the brand must learn from these mistakes and the feedback they received just as marketers do in the industry. It’s important for companies to relay messages in their advertisements effectively in order to gain a positive engagement they want from their content. As the world grows to adapt and confront social norms such as race and religion, the media industry must also adapt to the new ways of expressing these messages.